On April 15, as many as 700 refugees died off the coast of Libya after a fishing boat the migrants
were travelling with from Libya to the coast of Sicily capsized in the Mediterranean Sea. The
event has been called the worst incident that has been associated with migrants fleeing their
countries in the last decade and has raised questions about government funding and regulations
for the entirety of the European Union. This incident along with many others has raised questions
about local refugees in Austria, especially those in Vorarlberg.

As of January 2015, there are over 1400 refugees from a variety of countries living within a 30
km radius of one another in Vorarlberg. These refugees have found their temporary homes
through the Austrian government, which has assigned each Austrian county to host an equal
amount of refugees per county, With the help of Caritas, the charitable branch of the Catholic
Church in Austria, these refugees have been given a chance at a new life in Vorarlberg.


Manfred Felder, owner of Gasthof Goldener Adler in Hittisau, currently hosts eight Syrian
refugees who came to Vorarlberg three months ago. As the initiative by the government came
into full effect, he was one of the first people contacted as a source for the refugees.

“Most of the refugees come from the east of Austria…Vienna, Lower Austria. They said they
can not handle it anymore,” said Felder. “The government said to the states in the rest of Austria
that they should also take up some refugees. Someone from the town office asked me and I said
yes.”

Although Felder hosts several Syrian refugees, many refugees in Vorarlberg come from
countries like Afghanistan, Libya, Nigeria and Turkey. This is his first time hosting refugees, but
believes it will not be the last.

“We know that a lot more refugees will come and we know that the sources from the government
are not endless. The government will not be able to give more money to a lot more people.
Maybe people will have to get involved more, but the government does not have endless
supply,” Felder said. The best assistance is to assist the people where they live so they don’t have
a reason to come to Europe.” 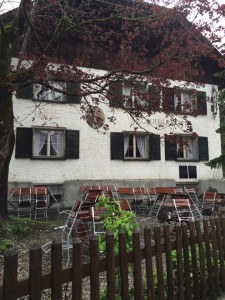 Matthew Randall, who works for Caritas in Dornbirn, also hosts refugees. These refugees are
hopeful to receive a permit to stay in Austria, although that is not always the case. 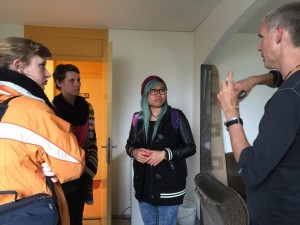 Interviewing Matthew Randall Matthew tells us of how funding works through Caritas and what the actual living conditions of the refugees are.

“There are different ways to leave the house. The most happy way to leave the house is for refugees to become  an official status. That means that the institutions grant them refugee status
or they receive a permit to stay,” said Randall.

“A not so happy way to leave the house would be if  the police came and deported people who
had a negative asylum case or people decided they have no more hope here of getting a permit to
stay and they leave voluntarily back to their country.”

Ben Iro, a refugee from Nigeria, is one of the clients currently living at Caritas. Fleeing his
country six years ago, Ben has found a new life in Dornbirn and has benefited from the many
helpful sources around Vorarlberg 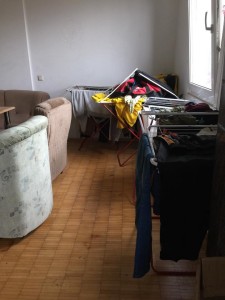 Common room at the Caritas House where Ben Iro lives. The rooms are mostly used for storing laundry rather than a place to socialize.

In order to stay in Austria and to acquire more privileges through the law, Iro has gone through
many application processes to receive permission to stay.
“I received twice negative results. I’m staying for the moment here. I’m searching for a better
job. It’s not easy to get an easy job here without any help from an agent to help people.
People are all different. They may wake up the next day, have a bad thing in mind or have
another thing to do. Its not for me to decide… If [the Austrian government] decides I should
leave then I must but I am staying for the moment. I don’t know what will come tomorrow. I
hope it will be a better tomorrow,” said Iro.

As three international students coming from the Netherland and from the United States, the
situation here in Vorarlberg was a concept that was hard to grasp, especially considering the
differences between the countries these refugees are fleeing form and Austria as a whole. The
differences that these refugees experience is unlike most culture shock that an average foreign
person experiences.

From landscape to language, the similarities between what these refugees once knew and what
they are going through now are far and few in between. However, with the help of people like
Matthew Randall and Manfred Felder, these refugees have a new approach at life and a new
opportunity for freedom. 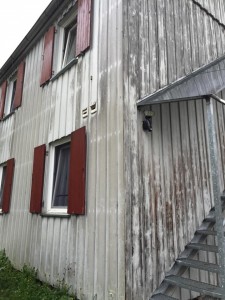 The Caritas house hosts a variety of refugees from all over the world.